I bring the sacred women's mysteries:

When women bleed on the earth, men don’t need to give their blood in warfare 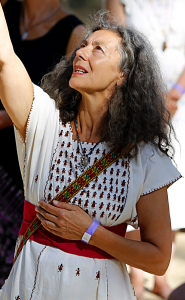 My name is Raquel Haug, (Rachel in het Nederlands) I am a storyteller and a teacher of the Sacred Feminine.

I left my home country, the Netherlands, after graduating from the Maastricht Academy of Dramatic Arts in 1983. After traveling to the US and Japan, I emigrated to the US where I lived for fourteen years. As a young mother I was introduced into native American ritual when I participated in a women’s ceremony, called a Moonlodge.
I was instructed into the blood mysteries, menstrual synchronicity and the connection between the women’s cycle and the lunar cycle.
It was at this ‘Medicine Wheel’ gathering that I experienced the Native American Sweatlodge for the first time.

When I moved back to Amsterdam in 1997, I had been pouring water for the women’s sweatlodge and facilitating Moonlodge ceremonies for several years.
Since then, I combine my work as a ceremonial leader and storyteller with teachings based on rites and stories of the Sacred Feminine. These last twenty-five years I have been sharing my knowledge about the transformation mysteries and the power of the menstrual cycle with women in Europe and the US. It’s hard to imagine now, but when I started out, most women felt uncomfortable with identifying themselves as a ‘feminist’ and acknowledging the menstrual cycle could be anything more then a purely bodily function. I am delighted and grateful for the enthusiasm of this new generation of young women who are just so hungry for this information and so open to explore their own paths on the physical and mental plane. I feel totally honored to be of service in this sacred way. 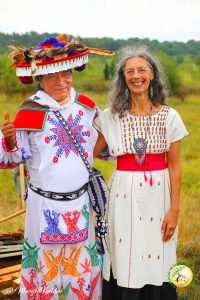 From 2016 – 2019 I was one of the organizers of the Dutch Kiva.
I continue to be part of the International Kiva family in support of the Sacred Kiva Fire.

You can send me a message or you can contact me by email: